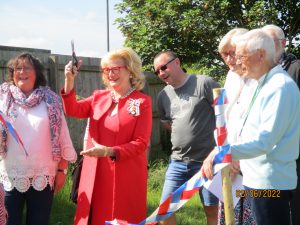 A woodland was officially opened during the Queen’s Platinum Jubilee celebrations. More than 100 trees and 200 shrubs 400 wips have been planted at Chepstow Park in Barleythorpe as part of the Queen’s Green Canopy project. County councillor Dave Blanksby (Ind Green) was joined by parish councillors and volunteers for the planting.

The woodland was officially opened by the Lord Lieutenant of Rutland, Dr Sarah Furness. 35,000 Daffodil bulbs have also been planted at the Buttercross Park, Hornbeam Park and along the main road in Barleythorpe.

This year we are planting the Queens Green Canopy NHS Woods in Linear Park, starting in November.  More than 150 trees and 100 shrubs